Ornamentation of Initials in the Insular Style

Through the Irish and Anglo-Saxon mission since the end of the 6th and 7th century, the Insular book art from the Early Medieval Ages had been adopted in scriptoria on the Continent, for example in Abbey Fulda. Lorsch manuscripts compiled around 800 show initials in Anglo-Saxon style, with the typical characteristics of Insular ornamentation: interlaced ornaments often with animal and human bodies, red-dotted borders around the corpus of the initial and the inclusion of further letters formed into a group of initials and sometimes covering entire initial pages. 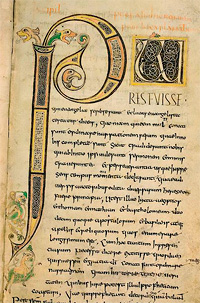 In the Lorsch Hieronymus codex with the commentary on the gospel of Matthew (Vatican, BAV, Pal. lat. 177) you can find these elements particularly elaborately executed. The first page of the manuscript is decorated with a P-initial covering almost the whole page and a group of initials LU executed in four colours and with voids (fol. 1r): the interior of the stem of the P is filled with small panels. The spaces within the frames alternate with interlacing ornaments and fretwork patterns. The upper terminations are shaped in the form of three animal heads and spiral motives, the lower terminations in the form of a wild animal and a bird with hair-line interlacing patterns wound around them. Two further letters, L and U, in a yellow frame are interlinked by delicate hair-line interlacing traces on a dark background. A voided bird corpus can be seen in the top left corner, a small red animal head with a green mouth slightly protrudes from the initial. The red-dot pattern surrounding both ornamental sections has partly faded.

This kind of initial art can also be found on other pages of Pal. lat. 177 and in further manuscripts from that time, during which the Older Lorsch Style and with it further Insular influences were introduced into the Lorsch scriptorium.