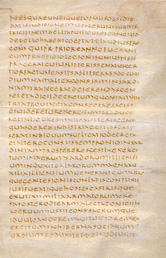 The Viennese manuscript from the Austrian National Library holds the only surviving version of the books 41-45 by Livius. They were found by Simon Grynaeus in the monastic library of Lorsch in 1527. Following the rediscovery, the first edition of the books 41-45 by the Augustan historian was published in Basel in 1531, with an introduction by Erasmus of Rotterdam. 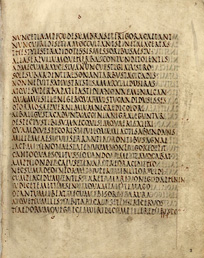 The “Vergilius Palatinus” from the Vatican Library belongs to the seven main testimonies from late antiquity for the oeuvre of the Roman ‘national poet’. The codex presumably arrived in the monastic library of Lorsch around 860 with the bequest of Gerward, the Palatine librarian of Emperor Louis the Pious. In Lorsch Sebastian Münster (1488-1552) was able to admire the manuscript and, due to its age, considered it to be an autograph of Virgil. 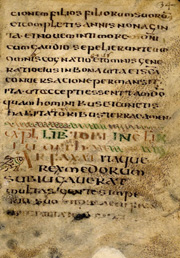 The palimpsest codex Pal. lat. 24 from the Vatican Library originally contained classical texts from Roman antiquity. Later, after these had been erased, the support material was reused in the 7th century for writings of the Old Testament. Amongst the remains of various manuscripts with the Roman classical texts are some dating back to the 4th century. Therefore, today, the palimpsest codex is one of the oldest surviving parchment manuscripts from the Occident. Also some of the classics of Roman literature are only documented here, amongst them are fragments by Livius and Seneca. 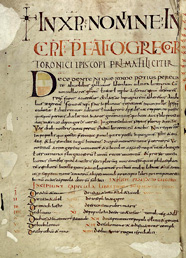 The universal history or also the history of the Franks by Gregory of Tours († 594) provides an insight into the 6th century, which otherwise offers sparse literary sources. The Heidelberg copy does not hold the original text as it already contains abbreviations and passages from the chronicles of the so-called Fredegar and his successors up until the year 741. Therefore, the codex provides an insight in the historiography at the time of Charlemagne († 814). Due to its date of origin around 800, the manuscript is one of the oldest surviving testimonies from the Lorsch scriptorium. 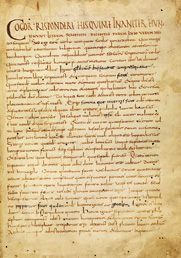 The “Lorsch Pharmacopoeia” compiled around 800 at Abbey Lorsch was nominated Document Heritage by the UNESCO in June 2013 and accepted into the “Memory of the World Register“, as one of the oldest medical manuscripts from the medieval Occident and as a „milestone in the history of medicine“. Next to a collection of 482 pharmaceutical recipes the codex holds an anonymous introduction (foll. 1r-5r), in which the author justifies medicine as a gesture of compassion and charity. 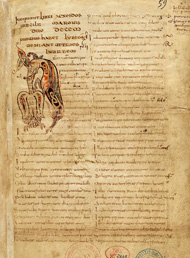 The manuscript of the French National Library in Paris is the oldest surviving testimony of Virgil’s epic poem “Aeneid” from East-Franconia. The text ends with verse 734 of the 5th book after the appearance of Anchises, who calls his son Aeneas to travel to Italy. The manuscript holds, moreover, the account by the so-called Dares Phrygius on the downfall of Troy, a chronicle of the 8th century on the Franconian history, and was presumably originally bound together with a universal chronicle, the Chronica maiora by Beda († 735), today held at Paris, BNF, Lat. 5018 (fasc. II). The combination of poetry and historiography was presumably supposed to portray the history of the Franks since their mythical origin, thereby referring to the medieval presumption that they derived from the Trojans. 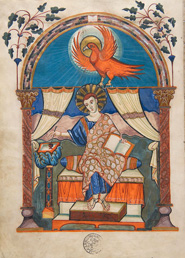 The probably most well-known and valuable manuscript in the collection is the “Lorsch Gospels”. The richly illuminated gospel book was created around 810 at the court school of Charlemagne and arrived in Lorsch in that same century. Presumably in 1479 the codex was split into two parts. The first part is today held in the branch library of the Biblioteca Naţională a României in Alba Iulia. The second part as well as one of the precious ivory plates, which once decorated the cover, are held in the Vatican Library. The ivory plate, which formerly decorated the front cover, is today in the collection of the Victoria and Albert Museum in London. 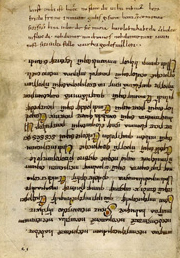 In the collection of sermons the “Lorsch Bee Blessing” was added in the 10th century in Old High German language (upside down) in five lines at the bottom edge of a page (fol. 58r). It is a Christian minded spell for calling back a swarm of bees, and at the same time it is a testimony of the oldest stage of the German language with a Rhenish Franconian influence. 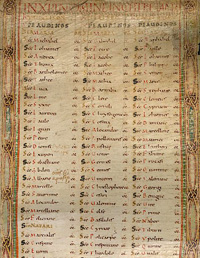 Frankfurt/M., Universitätsbibliothek, Ms. Barth. 179
Litany of the Saints
Lorsch, presumably after 843 until 876

The “Lorsch Rotulus” of the University Library of Frankfurt on Main comprises a litany of saints for the East-Franconian King Louis the German, grandson of Charlemagne. The artfully decorated rotulus is one of the most precious products of the Lorsch scriptorium and at the same time the only surviving liturgical rotulus north of the Alps from the Carolingian age. 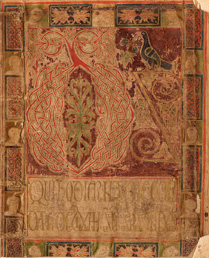 The illuminated liturgical manuscript from Lorsch, a sacramentary from the 9th century, has survived in two fragments, today held at Augsburg and Erlangen. The double leaf from Augsburg contains the Pentecost prayers, and its decorated initial page addresses the Miracle of Pentecost. The double leaf from Erlangen with a Te-igitur-page depicts Christ at the beginning of the eucharistic prayer of the celebration of mass. The fragments are remarkable, as only few illuminated manuscripts from the Carolingian age created in Lorsch have survived. 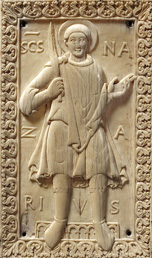 Hannover, Museum August Kestner, Inv.-Nr. 410
Ivory plate with a depiction of Saint Nazarius
Trier (?) or Lorsch (?), around 4th quarter of the 10th century (?)

The ivory plate of the August Kestner Museum presumably once decorated a cover of an illuminated liturgical manuscript from Abbey Lorsch, which had Saint Nazarius as its patron. The plate was probably made at the end of the 10th century in the Ottonian age and depicts Saint Nazarius holding a palm-branch as a martyr. 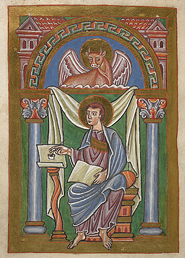 London, British Library, Harley 2970
Evangelistary
presumably Lorsch, around the 1st half of the 11th century

The illuminated evangelistary with the lessons on the liturgical year offers four full paged depictions of the Evangelists decorated with Gold, two initial pages on a crimson background and numerous golden and silver initials with scroll ornaments. In the inscription on folio 2r, which can also be found in four further manuscripts, the donor of the manuscript is named “Oudalricus peccator”, who can be identified as Udalrich, the abbot of Lorsch from 1056 until 1075.